At 9:15pm Monday night the AFRD was dispatched to a motor vehicle accident with one car in the water and a person trapped inside the vehicle. The first arriving crews found a sedan that had driven off an embankment through a bollard. The vehicle was found on the passengers side in a shallow stream with 1 person still trapped inside. The vehicle had extensive damage primarily to the front end, the patient was alert and oriented with minor complaints of injury.

The vehicle was stabilized with cribbing and struts, the windshield was removed and entry was gained to the patient. The patient was extricated to a stokes basket and carried to the waiting ambulance. AFRD transported the patient to UMASS Medical Center University Campus with non-life threatening injuries.

There was a light sheen on the water from the vehicle's fluids, hazmat booms were placed down stream. The Auburn Water Department and DEP were notified, the water department did respond to the scene. The electrical inspector was also notified due to underground wires being exposed from the bollard being dislodged.

AFRD cleared the scene at 11:40pm after providing scene lighting for APD and Direnzo towing. The vehicle was removed without incident.

Photos for media use. 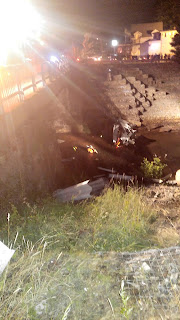 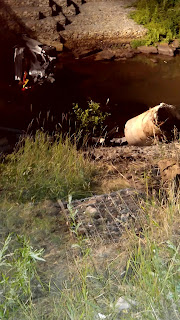 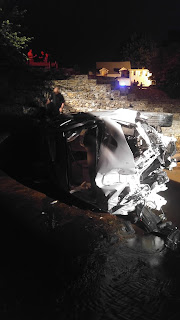 Posted by Auburn Fire Rescue Department at 7:17 AM