A fast moving 3 alarm fire on Friday night destroyed the Chester P. Tuttle Post at 88 Bancroft St. in Auburn. The fire was reported to the Auburn Emergency Communication Center at 7:57 p.m. reporting a fire in the kitchen. Engine 3 from the Headquarters station was first to arrive at 8:01 p.m. and struck a 2nd alarm with heavy smoke coming from the roof.

At the time of the 911 call the building was occupied with a little over 200 people eating dinner on the first floor of the building and patrons in the bar on the basement level. The fire alarm in the building was pulled and there was an orderly evacuation of the building. An off duty Auburn Firefighter was having dinner at the restaurant when the fire broke out and assisted in alerting patrons and safely evacuating them with staff.

A 3rd alarm was struck at 8:11 p.m. and at the same time the Incident Commander ordered the evacuation of firefighters from the building due to deteriorating conditions. Just minutes after the firefighters left the building there was a total collapse of the roof.

Auburn Fire Rescue Chief Stephen M. Coleman Jr. says there were no injuries reported of any patrons or firefighters. "With the amount of people in the building at the time of the fire we are extremely lucky tonight that we did not have any serious injuries and that everyone was able to escape the building quickly" Coleman said.

The fire is not believed to be suspicious and is under investigation by the State Fire Marshals Office in conjunction with the District 7 Fire Investigation Unit. Auburn firefighters were assisted on scene by mutual aid companies from Oxford, Millbury, Leicester, Charlton, Webster, Sturbridge and Worcester. 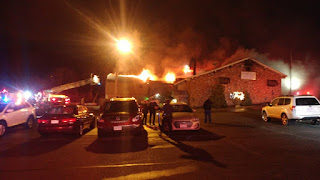 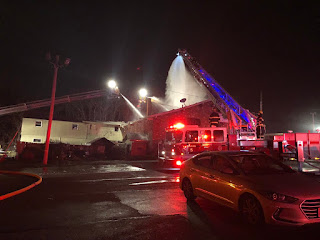 END
Posted by Auburn Fire Rescue Department at 2:01 AM