At 10:59 a.m. the Auburn Fire Rescue Department along with the Auburn Police Department was called to 394 Rochdale Street for a question of explosives at the home.  Explosives were found and the Massachusetts State Police Bomb Squad responded to the scene.

The state in which the explosives were found did not pose a threat to the community.  The Massachusetts State Police Bomb Squad did detonate the explosives at the Police Department's shooting range on Rochdale Street.

While searching the rest of the property, crews discovered a mix of hazardous chemicals.  The Massachusetts State HAZMAT Team responded to the scene.  The chemicals where identified and the home was made safe.


Picture for the media. 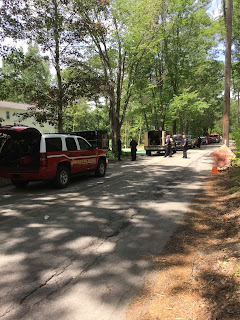