AFRD Group 3 was busy in the overnight hours on May 14, 2017. The all-nighter began at 11:27 p.m. when crews were requested to the Mass Pike westbound at the 91.2 mile marker just behind the Auburn Mall for a reported motor vehicle rollover. It was reported that two patients were unconscious. Engine 3 and Ambulance 1 responded and immediately requested the Rescue as crews were receiving updates. A total of three patients were extricated from the vehicle, one with life threatening injuries and 2 with serious injuries. All patients were transported to UMASS Memorial University Campus. One Ambulance was received mutual aid from Millbury.


Just as Engine 3 was backing into the station at 12:42 a.m. still soaked from the MVA rollover they were requested mutual aid to the scene in the Town of Charlton to 98 Baker Pond Rd. for a 2 alarm structure fire. Companies worked the scene for several hours in the pouring rain. AFRD Captain Justin Brigham said the rainy conditions made fighting the fire challenging. “It poured the entire time we were operating” Brigham said. 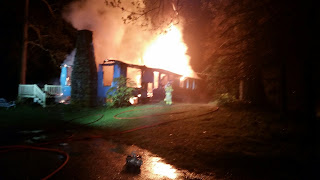