The states Hazardous Materials Response Team assisted the AFRD on Monday night tracking the source of an odor of gasoline in several storm drains on Jerome Ave.

Shortly after 7:30 p.m. the AFRD was dispatched to 30 Jerome Ave. for an odor of gas. On arrival they detected an odor they believed to be gasoline in the basement of 30 Jerome Ave. meters detected nothing and as a precaution Eversource was called to the scene to confirm the findings. A second set of meters confirmed no detection of natural gas. While on scene a second resident at 42 Jerome Ave. alerted firefighters they had an odor of gasoline in their basement. The odor could also be detected at several storm drains along the street.

The state HAZMAT team along with DEP were called to the scene to investigate and confirm the presence of a petroleum product with testing equipment. Petroleum was detected in the storm drains at low levels. The homes affected were metered and home owners were allowed to return.

All companies were clear of Jerome Ave. shortly after 10:30 p.m.

Picture for media use. 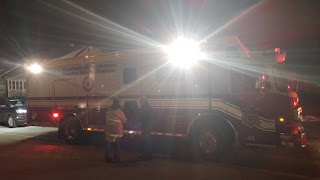