Fire on the Loading Dock at Worcester Envelope Co.

At 9:00 a.m. this morning the AFRD was alerted to a fire at the Worcester Envelope Co. on Millbury St. The caller reported they could see employees of the building attempting to extinguish a fire on the loading dock.

Engine 3 arrived on scene to find a fire on the exterior of the building in the padding attached to the top of the loading dock. The fire was quickly extinguished and remained at a first alarm.

The cause of the fire was determined to be from the rear lights on a tractor trailer that were left on and were pressed against the padding material on the loading dock.

Photo for media use 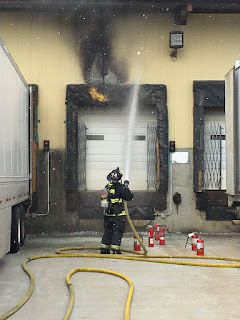 Firefighter Brian Sheridan operates a
hose line extinguishing a fire on the
exterior of the building.

Posted by Auburn Fire Rescue Department at 11:20 AM