At 1:22 p.m. this afternoon the Auburn Fire Rescue Department along with the Auburn Police Department were dispatched to the scene of a motor vehicle accident involving a pedestrian  at the intersection of Upland Street and Manor Rd.  It was reported that a pedestrian was struck by a dump truck.

On arrival crews found a male lying in the roadway not moving and a trash truck down the street in a yard with a utility pole snapped in half.  The male party was quickly given care in an Auburn Fire Rescue Ambulance with the assistance of UMASS Emergency Medical Services and transported to UMASS Hospital with serious life threatening injuries.  The only injury was the driver of the trash truck and the only vehicle involved was the trash truck.

The accident is under investigation by officers assigned to the CEMLEC Accident Reconstruction Unit.  National Grid and Direnzo Towing also were called to the scene and assisted emergency personnel. 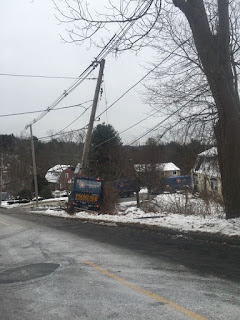 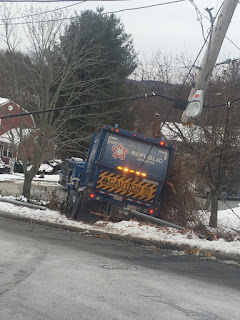